pqAnimationTimeWidget caused circular updates: changes in the timesteps caused combo-box to change which had the potential to cause the time-value to change. This manifested itself in #19953 (closed).

This fixes that by cleaning up the implementation of pqAnimationTimeWidget to cleanly avoid causing any modifications to ParaView state when updating UI elements.

These changes also better handle the case where the chosen timevalue is not one of the timesteps available. The combobox now lists it as a new entry with '(?)' suffix, a pattern we've followed elsewhere too. The timestep spin box also uses the same suffix.

UI when playmode is sequence and timevalue does not match a timestep exactly:

UI when play-mode is snap-to-timesteps, and timevalue does not match a timestep exactly: 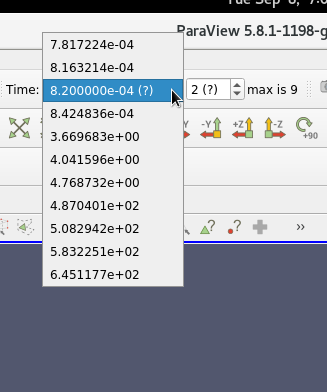