CMakeSL - proposal of a new scripting language for CMake

Hello, I've been working on an alternative scripting language for CMake and I'd like to propose merging it into the CMake codebase.

Purpose of this proposal

My goal is to present the approach that I took with all its pros and cons, and explain why I think it's a good way for the future of CMake.

The thing that I'd not want to spend too much time on is CMakeSL's API. In this proposal and in CMakeSL's documentation you'll find code like cmake::minimum_required(cmake::version(3, 14, 4)); where the cmake:: seems to be a boilerplate, the code looks verbose etc. I want to explicitly point out that it's only an API and, if there will be a need, it can be very easily changed.

tl;dr list of pros and cons of the language

Here's a high-level diagram of CMakeSL and how it's integrated with CMake codebase. 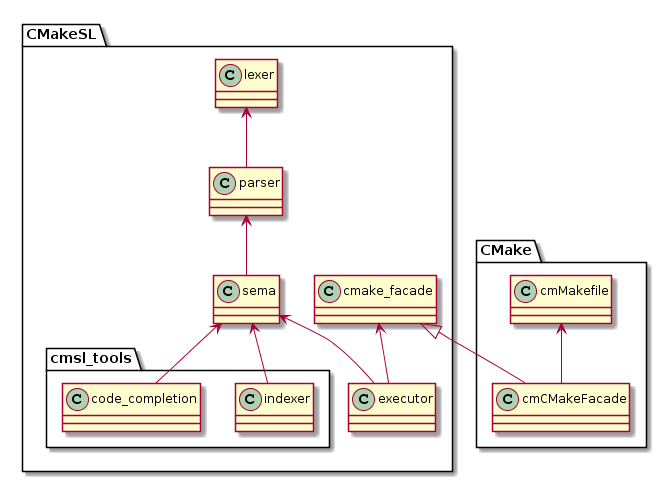 CMakeSL bases on CMake 3.14 (that was the latest version when I started working on it). You can find forked repo here: https://github.com/stryku/cmake_for_cmakesl. All required changes are on cmakesl branch. A good starting point to check out is the cmCMakeFacade class. That's the interface between CMakeSL and complex CMake systems.

CMakeSL is basically a set of libraries that implement a statically typed scripting language. The scripting language is (using some integration code) used by CMake to execute CMakeLists.cmsl scripts. The libraries are statically linked to the cmake binary, so the result is a regular cmake binary with 'old' CMake and CMakeSL support. In the script you can find how to build CMake with CMakeSL support.

It is implemented in C++17 and a little of python3.

CMakeSL is advanced enough to build itself (without generating documentation). See CMakeLists.cmsl files in the repo.

The only stage of CMake usage that CMakeSL affects is the configuration step. The generation step, all the already supported generators, building and other CMake features remain the same.

You hate it or you love it. I know that a lot of people don't like it and I know that a lot of people complain about imperative paradigm. CMakeSL is highly inspired by C++. It looks and works a lot like C++. It provides well known concepts like types (including builtin generics, e.g. list<T>), variables, references, functions, classes with members and methods, namespaces and more. Here's why:

The whole CMakeSL machinery seems to be an overkill for such a simple task as writing a couple of scripts that instruct CMake how to build a project. Well, that's partially right. It seems complex and unnecessary if you think about the hello world example or a one-executable project. But, CMakeSL aims to make doing simple tasks simple, that's for sure. Furthermore, it provides features like functions, classes, namespaces, modularity, type safety and more, which make it powerful enough to be clear and elegant in huge projects, with thousands of lines of CMakeSL code.

On the other hand, in a CMakeSL script you CAN call add_subdirectory() with a CMakeLists.txt written in 'old' CMake. In the CMakeSL repo you can see an example of such. In the root CMakeLists.cmsl file, there is an add_subdirectory call that adds external/googletest subdirectory. Of course the googletest library doesn't provie CMakeSL scripts. It provides 'old' CMakeLists.txt. The gtest and gmock libraries created there are later on used in tests, in CMakeLists.cmsl scripts. Such behavior mitigates eventual migration of a given project, form 'old' CMake to CMakeSL. You don't need to migrate the whole project at once. You migrate a directory after directory, which eases the process.

It works the other way as well. In 'old' CMakeLists.txt you can call add_subdirectory() with a script implemented in CMakeSL.

While C/C++ tools that don't require semantic information (e.g. clang-format, Doxygen) work out-of-the-box, tools like clang code completion can not be used just like that. Because of that, CMakeSL brings two tools that provide CMakeSL's code semantic information. Indexer and code completion. They are implemented in cmsl_tools library. It has C language interface, so it can be used practically everywhere. See the tools section in README for more info.

Every CMakeSL library has automated tests. They are run on CI. Additionally, Clang's AddressSanitizer, LeakSanitizer and UndefinedBehaviorSanitizer don't complain (they are not integrated on CI yet).

Why not use any of the ready made languages

That's a very good question that I heard a lot. I agree that using an already existing language would be and option, but I think that it'd be an option in the short term. Look, CMake has been here for almost 20 years. It has a great community. It's been used by huge projects and companies. More projects are migrating to CMake, e.g. Qt. In short, it seems that CMake is going to be used for a long, long time. Which is great, of course, but when you're in a perspective of a couple of decades of project maintaining, you want to keep as many parts of the project as possible in your garden. I believe creating and maintaining scripting language will pay-off in the long term. That's why I designed and wrote CMakeSL without a big list of dependencies and requirements. It's relatively easy to embed CMakeSL into the existing CMake codebase.

Work to be done before the eventual merge

I think CMakeSL, thanks to its features and compatibility with a lot of C/C++ tools, would be a step in the right direction of CMake life.

I'm open for discussion about any aspect of the project and I'm very curious what do you think about all this.

I'd like to thank to Bartosz Duszel, Piotr Płaza, Stanisław Kubiak and Wojciech Stróżyński for help with this proposal (: