A major missing piece in CMB V4 is the ability to explicitly define a task/activity. In V3 things were pretty simple - ModelBuilder could only be used to define a simulation while in V4 ModelBuilder's task of Simulation Construction is loosely modeled:

There are a bunch of other tasks that need to be done in a CMB Workflow:

What is a Task?

A task is a conceptual part of a workflow. In fact a set of tasks is what defines a workflow. Here are some example tasks (and related subtasks):

In addition there would also be a Task Manager (or Workflow) that would be responsible to properly manager the Tasks.

For example the following is a conceptual example of a workflow containing 3 tasks: 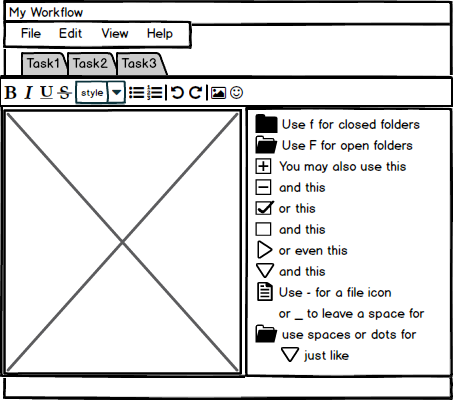 The active task would have complete access to the components of the client interface (menubar, toolbar and the "main" widget (in this case the body of the tab widget. Questions

I presume that this is a continuation of the previous workflow discussions, but to make sure I am calibrated:

I think a set of use-case descriptions would be very helpful toward understanding the software requirements. To start, I can formalize the GSSHA simulation workflow that Amanda described to Bob and me last year (although I am not sure when I will do that...).

The current description is focused on defining workflows and tasks. Looking ahead to the execution, the "workflow manager" will need some kind of repository to store/track the data involved in each individual workflow. Girder might be a good starting point for that infrastructure, but I don't want to get too far ahead of myself.

Although the main workflow focus is for things CMB does, we should design the workflow manager to support tools outside of CMB. As a simple example, I can foresee the need for a "review" task, in which one or more people "sign off" on some data/resource before it is considered ready for use in downstream tasks.

I think this question is best addressed after one or more use-cases have been examined. But to start, I would vote for an approach like Ansible, which uses a declarative specification (yml) at the top level, that can invoke programs and procedural scripts when processed by the Ansible runtime. In our case, for example, a user could "initialize" a new workflow by specifying a yml file to the workflow manager. 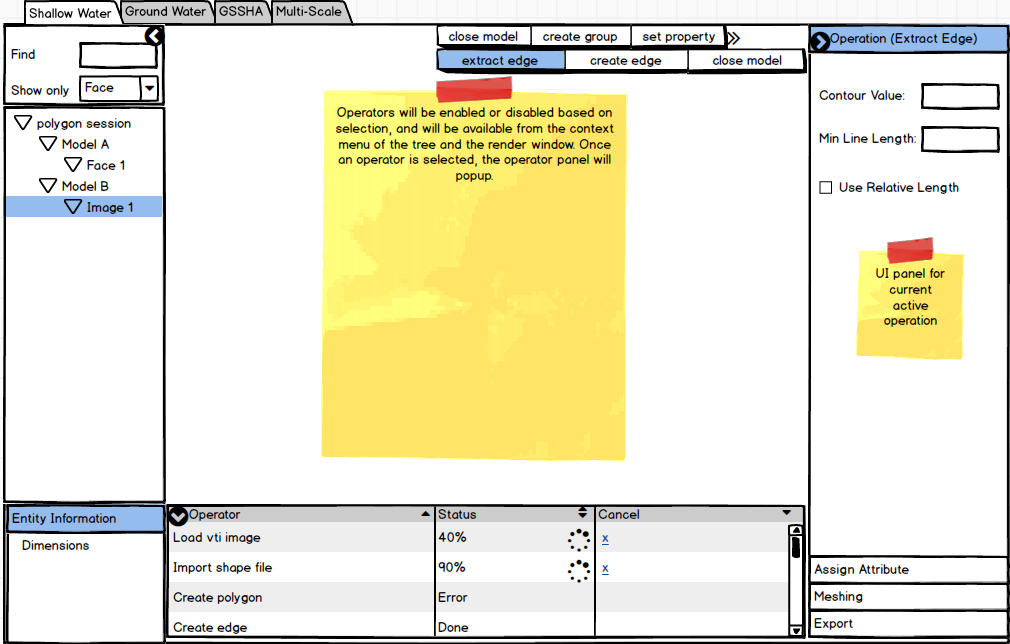 Lets assume that a user have the following set of Tasks that constitute a workflow:

Couple of things to observe concerning the above workflow:

In terms of resources (meshes, models, and attributes systems) - the model defined in Task 1 is the same model used in tasks 2-4 while the attribute systems used in the workflow are not so straight forward:

The above workflow works well when starting from scratch but lets assume someone already had created a geometric model and wants to share it - If Task 1 had an option to load in a model then the user would simply load in the geometry and select task completed. Another potential sub-use case concerns Task 2. Say that in order to start the process of defining the simulation the user needed to specify the number of parameters being solved for (the Proteus Hydro code is structured this way) - so the Task when initially opened would prompt the user for this information and then initialize the attribute system appropriately.

There needs to be a mechanism to indicate that a task is completed (or at least completed enough to move to the next dependent task). So each task would have an optional completion validator. Ideally SMTK would provide some simple ones that the designer could use in their task description - for example in the above workflow the validation criteria could be the following:

In terms of when to evaluate the completion criteria, ideally each active task could call its validation method after an operation is executed - conversely the user could be made to hit a completed button when he/she thinks the task is completed. In this approach if the task's validation checker passes, the task is marked as done and cannot be edited further and the tasks that depend on it that can be made active are activated. Note that there would be an edit button for completed tasks. When a tasks is reopened for editing, all dependent tasks are "frozen" until the task validated as completed.

Analogous to SMTK 1.0 a Task Template is used to generate a Task while a Task is represents the state of the instantiated Task. Tasks can be saved out and loaded back in again in order to allow the user to pick up where he/she left off.