GNU Emacs is the king of text editors, it has been around since the mid-1970:s and it still actively being developed. It is available on multiple platforms, including Microsoft Windows, Mac OS X, and Linux. It runs either as a modern windows-based application or you can use it in a terminal to edit on a remote machine. It can be extended using it's built-in programming language Emacs Lisp and there are literarily thousands of extensions available.

See the page CMake Editors Support for CMake support in other editors.

See the combined syntax highlighting and indentation mode in the CMake source tree. To enable it, add the following to your .emacs file:

Although the standard package have some syntax coloring support, this package raises the bar quite a bit.

The following is colored: 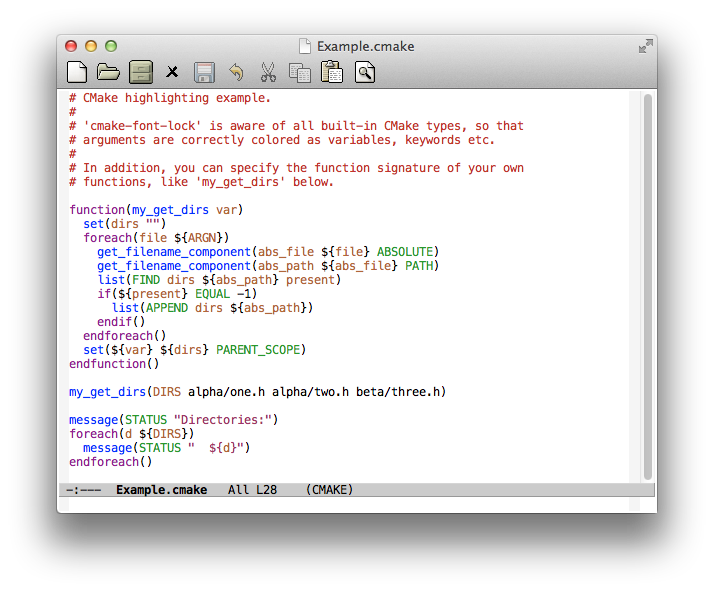 syntax check and other handy utilities

Install cpputils-cmake, then you can:

I've been long irritated with having to deal with multiple buffers all name CMakeLists.txt. Emacs by default will call them CMakeLists.txt, CMakeLists.txt<2>, CMakeLists.txt<3>, etc.. This is really hard to switch back and forth when the buffer names are difficult to associate with location.

I've found a couple of solutions to this problem.

I actually prefer renaming my buffers with my cmake-rename-buffer function, because the buffer names start with a lower case letter. :)

Better handling of _ for movement commands

The following will make M-right and M-left stop after each word of a multiword identifier like add_custom_target. Unfortunately, this breaks the font-lock support of the standard CMake package. However, it is compatible with the cmake-font-lock package.