CPack builds binary installers for a variety of platforms using CMake's existing installation infrastructure (see the list of supported CPack generators). Augmented by a set of CPack-specific macros, a program built with CMake can easily be distributed via a user-friendly installer.

By default, CPack's installers consider all of the files installed by a project as a single, monolithic unit: either the whole set of files is installed, or none of the files are installed. However, with many projects it makes sense for the installation to be subdivided into distinct, user-selectable components: some users may want to install only the command-line tools for a project, while other users might want the GUI or the header files.

This document describes how to configure CPack to generate component-based installers that allow users to select the set of project components that they wish to install.

The principles of CPack component packaging are based on different ways to group things together in order to define component content.

There are some basic rules about components:

the COMPONENT option should be specified with the name of the chosen component. This means that all objects (TARGETS, FILES, ...) concerned by this install rule will belong to the specified component.

If some INSTALL rule does not specify the COMPONENT CMake will create a COMPONENT named Unspecified which contains the target of every such rules.

After that grouping and dependencies may be specified by two ways:

CPack comes with several binary Generators: NSIS, PackageMaker, TGZ, ZIP, RPM, DEB... Depending on the capacity of the specific generator the component packaging will produce:

The component aware generators may be forced to ignore component if one set:

If this variable is set at CMake time (inside a CMakeLists.txt) then all generators will be producing a single a.k.a. MONOLITHIC package file. Since CMake/CPack 2.8.4 the CPACK_MONOLITHIC_INSTALL var may be handled at CPack time if set inside CPACK_PROJECT_CONFIG_FILE.

Some component-aware generators have backward-compatible behavior which makes them NOT generate a component based install - this is true for RPM, DEB, and any of the archive generators. If you want to change this default non-component-aware behavior you may set the specific variable CPACK_<GENNAME>_COMPONENT_INSTALL to ON. For example for enabling component for the RPM generator you'll have to:

Note that the single variable CPACK_ARCHIVE_COMPONENT_INSTALL applies to all archive generators, including STGZ, TBZ2, TGZ, TZ and ZIP.

The name of the package generated by CPack is controlled by several CPACK_xxx variables. And some name mangling rules.

In this document, we will develop a simple installer for a simple library that has three components: a library binary, a sample application, and a C++ header file. When we have finished, these resulting installers will looks like the customizable installers below, shown for Mac OS X and Windows: 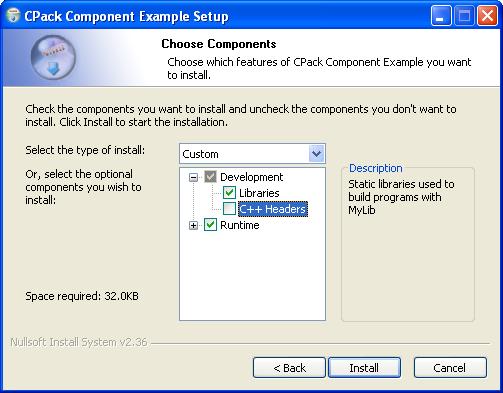 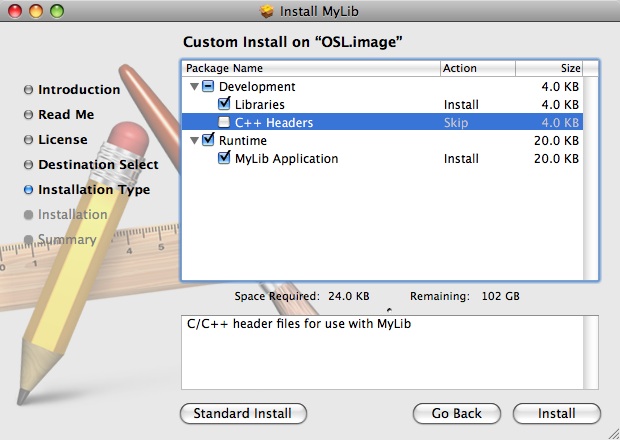 To begin, you should be able to build graphical installers using CPack either on Windows (using the NullSoft Installation System, NSIS) or Mac OS X (using PackageMaker). Also, as of the time of this writing, the extensions to CPack required to build component-based installers are only available since CMake 2.6.1 (NSIS and PackageMaker) or CMake 2.8.3 (Archive Generator). Component support for other CPack generator should come sooner or later, check the release notes.

As our primary example, we will use a simple library called "MyLib" that builds a single library (mylib) and an application based on that library (mylibapp). The file ComponentExampleStart.zip contains the skeleton of such a library, with the following build and installation commands in CMakeLists.txt:

You should be able to configure, build, and (optionally) install this project using CMake with its library, application, and header file.

To build binary installers with CPack, first add the following to the end of CMakeLists.txt:

More information about CPack and its configuration macros can be found here, but this boilerplate suffices to enable the packaging target in a CMake build. From here, makefile users can involve make package to build a binary installer (e.g., on Mac OS X) and Visual Studio users can build the PACKAGE target.

Throughout this tutorial, we will be setting more CPack macros in CMakeLists.txt to communicate with CPack. It is very important that the SET commands for these macros come before the include of the CPack module!

The first step in building a component-based installation is to identify the set of installable components. In our example library, we have decided on three components: the library binary, the application, and the header file. This decision is arbitrary and project-specific, but be sure to identify the components that correspond to units of functionality important to your user rather than basing the components on the internal structure of your program.

For each of these components, we need to identify which installed files are part of the component. For each INSTALL command in CMakeLists.txt, add an appropriate COMPONENT argument stating which component the installed files will be associated with:

Finally, notify CPack of the names of all of the components in your project by setting the CPACK_COMPONENTS_ALL variables:

At this point, you can build a component-based installer with CPack that will allow one to independently install the applications, libraries, and headers of MyLib. 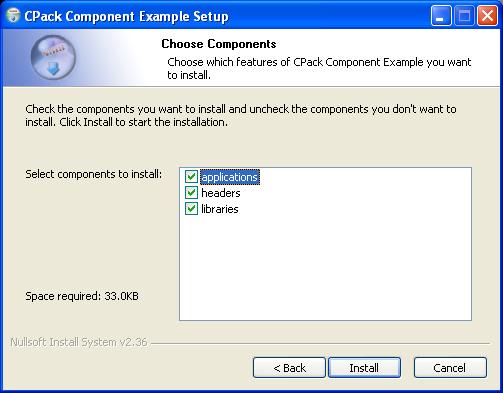 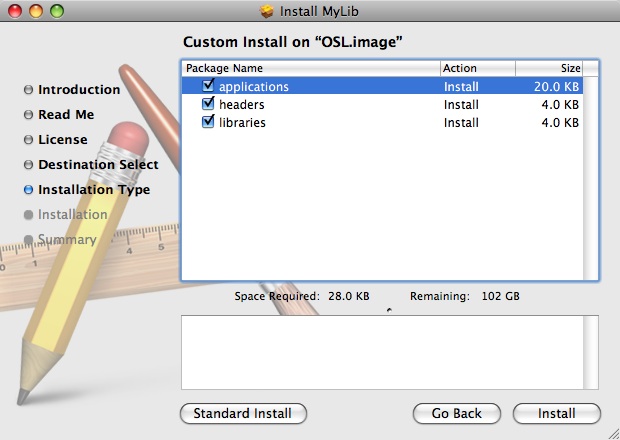 If you have built a binary installer at this point, you may have noted that the names of the actual components in the installer are not very descriptive: they just say "applications", "libraries", or "headers", as in the component names. We can improve on these names by setting several additional CPack variables:

Any macro prefixed with CPACK_COMPONENT_${COMPNAME}, where ${COMPNAME} is the uppercase name of a component, is used to set a particular property of that component in the installer. Here, we set the DISPLAY_NAME property of each of our components, so that we get human-readable names. These names will be listed in the selection box rather than the internal component names "applications", "libraries", "headers". 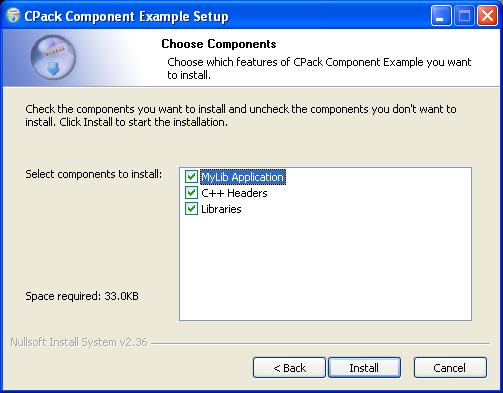 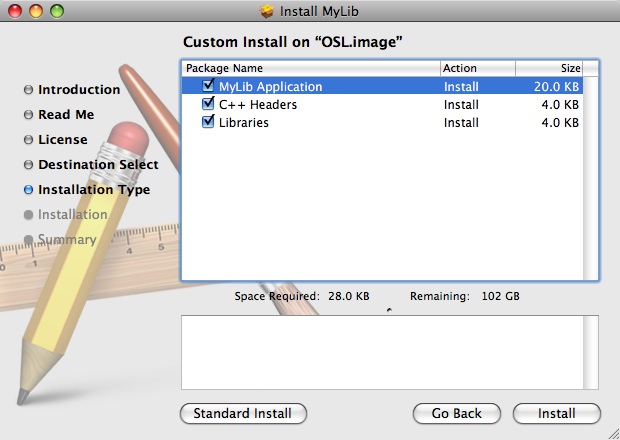 There are several other properties associated with components, including the ability to make a component hidden, required, or disabled by default, to provide additional descriptive information, etc. We will encounter some of these other properties later; see the macro reference for a complete list.

Generally, descriptions should provide enough information for the user to make a decision whether to include the component, but should not themselves be more than a few lines long (because the "Description" box in the installers tends to be small). 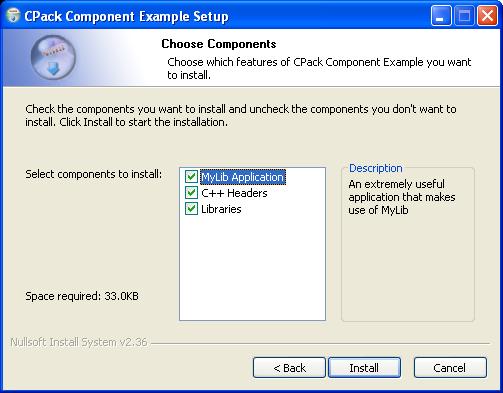 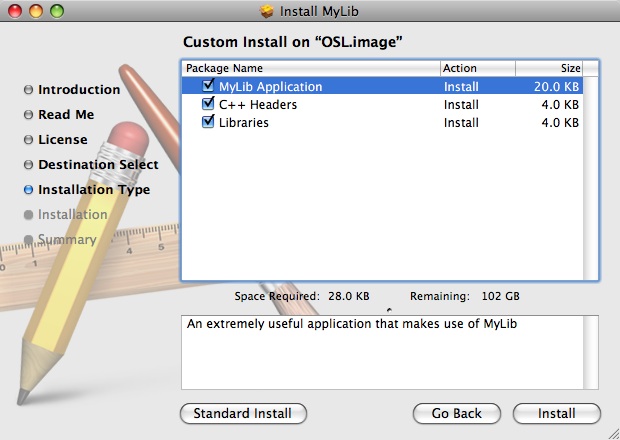 To illustrate component dependencies, we will place a simple restriction on our component-based installer. Since we do not provide source code in our installer, the C++ header files we distribute can only actually be used if the user also installs the library binary to link her program against. Thus, the "headers" component depends on the availability of the "libraries" component. We can express this notion by setting the DEPENDS property for the HEADERS component as such:

The DEPENDS property for a component is actually at list, and as such a component can depend on several other components. By expressing all of the component dependencies in this manner, you can ensure that users will not be able to select an incomplete set of components at installation time.

We will expand our example by categorizing its three components, "applications", "libraries", and "headers", into "Runtime" and "Development" groups. We place a component into a group by setting the GROUP property of the component to the name of the group as follows:

Like components, component groups have various properties that can be customized, including the DISPLAY_NAME and DESCRIPTION. To customization a component group, set the appropriate CPack macro with the prefix CPACK_COMPONENT_GROUP_${GROUPNAME}, where ${GROUPNAME} is the uppercase name of the group to modify. For example, the following code adds a description to the "Development" group:

Once you have customized the component groups to your liking, rebuild the binary installer to see the new organization: the MyLib application will show up under the new "Runtime" group, while the MyLib library and C++ header will show up under the new "Development" group. One can easily turn on/off all of the components within a group using the installer GUI. Some additional customizations of component groups are possible; please see the macro reference for a complete list. 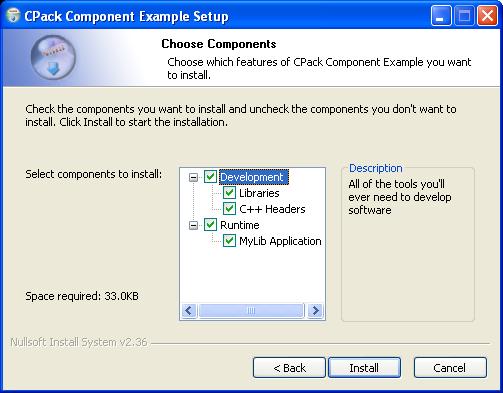 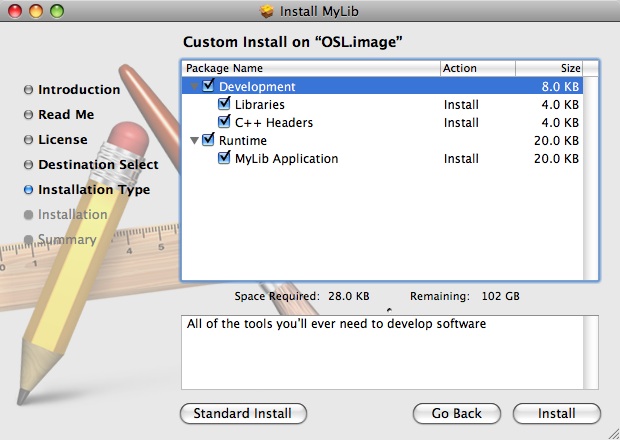 Like components and component groups, installation types have some properties (e.g., DISPLAY_NAME), which can be set via variables with prefix CPACK_INSTALL_TYPE_${INSTNAME}, where ${INSTNAME} is the uppercase name of the installation type. See the macro reference for additional information.

Next, we set the INSTALL_TYPES property of each component to state which installation types will include that component:

From here, you should be able to turn your existing CPack-generated binary installers into component-based installers to provide your users with more-flexible installation options. The complete example constructed by this tutorial is available as ComponentExample.zip. For a more advanced example of a component-based installer build with CPack, please visit the Boost-CMake project.